Legend of Mongolia (蒙古往事) is a fictionalized biography of Genghis Khan, the leader who united the fiercely independent tribes known today as the Mongols, thanks to his iron resolve, military savvy, shrewd alliances, and willingness to shed blood. 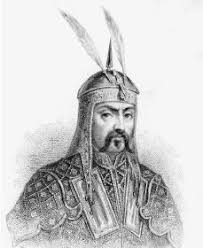 Written mainly in Chinese prose, the book is peppered with original poems by the author, Mongolian words, and citations from an enigmatic 14th-century work, Secret History of the Mongols (蒙古秘史). What emerges is a stark and personal view of Temüjin, the man who became the Khan of Khans, as envisaged by writer Ran Ping (冉平).

A Han Chinese who neither speaks nor reads Mongolian, the author has arguably molded the very image of Genghis Khan among contemporary Chinese through a TV series based on his screenplays (“Genghis Khan,” 26 episodes, 1991), the script for an award-winning movie (“Genghis Khan and his Mother,” 1997), and more recently this popular novel, Legend of Mongolia, short-listed for the Mao Dun Literary Prize in 2008.

For my complete synopsis, click here. If you are interested in the author’s use of Mongolian terminology in the Chinese novel, see also 《蒙古往事》及其汉化的蒙古语.