Coup d’état Fiction: A Curiously Turkish Genre offers suggested reading for books that capture the Zeitgeist during the years that followed modern Turkey’s not infrequent periods of dictatorship.

The winners of the Junma Literary Awards for Ethnic Minority Writers (骏马奖) — handed out every three years since 1981 — were announced in early August. The competition is designed to promote writing by authors who belong to one of China’s non-Han peoples. A roundtable of five literary figures including Liu Daxian (刘大先), the editor of the quarterly民族文学研究 , discuss the winning titles in聚焦时代生活 彰显民族特色.  One trend: Emerging female writers such as Jin Malian (Hui), Xiao Mei (Naxi) and Tao Liqun (Zhuang). Tao wrote 母亲的岛 (陶丽群著) about the escape of a trafficked village woman.

《保安语汉语词典》, a Bonan-Chinese dictionary, has just been published by the authorities in Gansu’s Linxia City. The Bonan people (aka, Bao’an 保安族), now numbering around just 20,000, “are believed to be descended from Muslim Mongol soldiers stationed in Qinghai during the Yuan or Ming dynasties,” according to Wikipedia, and speak a Mongolic tongue. Since the language does not have its own script, the dictionary represents the sounds of Bonan in IPA and a proposed set of letters (保安语使用记音符号字母表 (方案)). In 2001, the city also published 《东乡语汉语词典》, a Dongxiang-Chinese dictionary. The Dongxiang speak a Mongolic language and number over 600,000, and are concentrated in the Linxia Hui Autonomous Prefecture, but also live in Ningxia, Qinghai and Xinjiang. 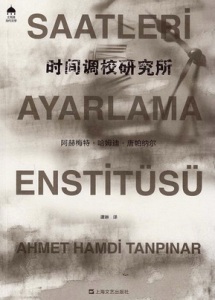 At long last, what is arguably Turkey’s most classic novel of the 20th century, Saatleri Ayarlama Enstitüsü, known in English as The Time Regulation Institute, has been published in Chinese. Ahmet Hamdi Tanpınar’s satirical look at the effects of a social engineering project gone awry — as the Turkish authorities desperately instructed the public to ape the West while jettisoning its Ottoman culture — has been rendered by a German-based Chinese translator, Tan Lin, as 时间调校研究所 (谭琳译). Regrettably, the Chinese is based upon the German translation of Tanpınar’s original; indeed, there is a dearth of well trained Turkish-Chinese literary translators, though several of Orhan Pamuk’s novels have been translated from the Turkish for Horizon Books by the likes of Shen Zhixing (我的名字叫红，沈志兴译) and Chen Zhubing (我脑袋里的怪东西, 陈竹冰译).  时间调校研究所 joins a series of five Chinese renditions of contemporary Turkish novels (土耳其当代文学丛书) already published by Shanghai Literature and Art Publishing. They include novels by some of Turkey’s best known living writers, such as  Oya Baydar and Mario Levi (whose  Istanbul Was a Fairy Tale was also translated direct from the Turkish as 伊斯坦布尔是一个童话). And more good news: An additional four Chinese translations of Turkish novels will join the series in late 2016 or early 2017, according to a spokesperson for the publishing house. They are: The Dervish Gate by Ahmet Ümit; Hakan Günday’s The Few; Hakan Bıçakçı’s Dark Room, and Secrets Dreamed in Istanbul by Nermin Yıldırım.

阿云嘎：蒙古族作家应该发挥得天独厚的优势 is an interview with Ayonga, Mongolian author of 满巴扎仓 (阿云嘎著), literally, Manba Rasang. This is a thriller revolving around a mysterious medical canon dating from the Mongol-ruled Yuan Dynasty. Ambitious Manchu courtiers want to take possession of this precious pharmacopoeia, but are thwarted by the temple’s “lama-doctors.” Written in Mongolian and translated into Chinese by female translator and poet Hasen (哈森), the Chinese rendition – no doubt proofed by Ayonga who is bilingual — is in turn being rendered in English by UK-based Jim Weldon.

A profile of 特·赛音巴雅尔, an ethnic Mongolian, author and director of China’s Museum of Ethnic Literature (中国少数民族文学馆), located in Hohhot, Inner Mongolia.

Altaic Storytelling has learned that the Swedish rendition of Last Quarter of the Moon has been commissioned by Bokförlaget Wanzhi, and will be translated by Anna Gustafsson Chen. Previously published editions include Dutch, English, Italian, Japanese and Spanish, and the French version launches in September.

Twenty works by non-Han authors will be granted publication subsidies (扶持专项作品), according to a press release from the 2016 Ethnic Minority Literature Development Project (中国作协少数民族文学发展工程办公室). They include six authors of Altaic origins, including a novel in Kazakh by 海达西·帕提牙克, works in Uyghur by瓦依提江·吾斯曼 and 吐尔逊·木沙, and works in Mandarin by 海风 (Mongolian) and宁延达 (Manchu).

Kaya Genç reviews the premier English translation of Felatun Bey and Rakım Efendi: An Ottoman Novel. The Turkish original by Ahmet Midhat Efendi was first published in 1875. In the

newly penned Afterword by Holly Shissler, she suggests it has similarities with Turgenev’s Diary of a Superfluous Man. Felatun Bey is the “shallow Westernized Turk who doesn’t really know Turkish or French yet devotes his life to appearing like a Westerner living in Istanbul.”