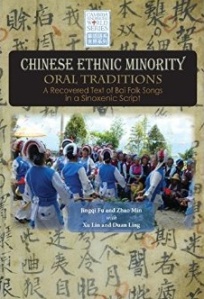 Chinese Ethnic Minority Oral Traditions: A Recovered Text of Bai Folk Songs, a new work in the Cambria Sinophone World Series, was published recently. A brief backgrounder on how it came into being:

In 1958 while conducting fieldwork in Yunnan, a professor came across a rice paper booklet with strange script created from Chinese characters. This turned out to be a folksong booklet in Old Bai script. She safeguarded it carefully through the tumultuous Mao years until the 1990s, when the political environment had relaxed enough for her to conduct full-scale ethnographic research. Very few such texts remain, and what makes this booklet even more valuable is that it records songs that have already disappeared, including some with sexually explicit content.

One of the features of the book is how it delves into the use of “created characters” that were used in the Chinese-character based “old Bai script” to capture vocabulary or concepts that apparently did not exist in standard written Chinese.

But from my point of view, the most noteworthy aspect of the work is how the folk songs have been transcribed and translated. “The songs are presented in a multilinear format that includes the Bai text, an IPA version of the sound, a word-for-word Chinese line, a word-for-word English line, and vernacular (Standard) Chinese line and vernacular English translation,” according to the summary at Cambria Press.

The great majority of similar works available in China are often virtually monolingual — in a fluent Chinese translation only — which leaves the reader unable to get a feeling for the imagery or rhythm of the original, and on a more subtle level it reinforces the perception that the written Chinese version is “genuine” while the (unseen and undocumented) original oral version is somehow less so.