Three things strike you as you hold this weighty tome in your hands: It’s 2,075 pages, there are no Turkic-sounding names listed among the compilers, and it’s new 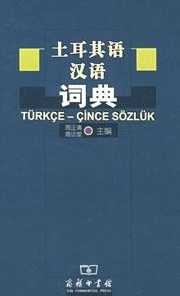 I recall my 2001 bus trip across Turkey from Istanbul at the doorstep of Europe to Diyarbakir in the southeast in search of Kurdistan, a place that my Turkish friends heatedly assured me “doesn’t exist.” Well, partly on such a quest. The other reason was my ardent desire to practice my (fledgling) Turkish with any native speaker outside Istanbul who didn’t know English or German.

Along the way I passed through Cappadocia, Kayseri and Urfa, and in each city I went to the main bookstore to see if I could buy a Turkish-Chinese dictionary. No luck.Xi’an and Istanbul were connected via the Silk Road well over 1,000 years ago, and even today you can visit ancient caravanserai (inns for caravans along the trade route) that are still standing. I visited one in Diyarbakir where you can see the stones worn down by camels’ hooves. Yet almost no-one I met in Turkey had the slightest idea that far away in northwest China there are millions of Turkophone speakers. A case of collective amnesia?

Perhaps, with a large dose of geopolitics to boot. When Atatürk founded the Republic of Turkey in 1923, he did indeed institute what the editors of the dictionary refer to as a “Cultural Revolution” (文化革命). Turkish writing was romanized and the country was urged to look to Europe, and to turn its back on both Turkey’s Central Asian roots, and Arabian culture. Ditching the old Turkish script based on Arabic was part of that.

The role of Turkey’s switch to the Latin alphabet in isolating Turks from Turkic speakers in China shouldn’t be underestimated. In the early twentieth century, before Latin letters took over in Turkey in 1928, well-educated Uighurs and Turks shared the same adapted Arabic script and could communicate in writing. But the Uighurs in China today still use the older Arabic script that is virtually unintelligible to most 21st-century Turks.

Turkey’s ties with Central Asia were also largely frozen during the Soviet Empire, as Turkic speakers in the ‘stans were taught in Russian and strictly discouraged from any hint of pan-Turkic nostalgia.

And of course, today Turkey is even more oriented toward Europe as it knocks loudly at the EU’s door.

Back to our new Turkish-Chinese Dictionary (土耳其语/汉语辞典) published by the Commercial Press, and its enlightening four-page Foreword. It’s chock-full of facts and numbers: Turkey’s land size, population, date of establishment, names of the countries with large Turkic-speaking populations, and a quick backgrounder on Turkish grammar.

But it is also a peculiarly Chinese piece of writing that might not “translate” so well if you happen to be Turkish or Uighur. Twentieth-century happenings in Xinjiang, including the founding of the short-lived East Turkestan, are not given a mention. The emphasis is on the more ancient history recorded by Chinese scholars. Several references to the “Turkic people” (突厥) seem to position them as a subset of the Chinese empire, e.g., “The Turkic people were the first of all the ethnic minorities in the northern part of ancient China to invent its own script.” Another reference is made to a two-hundred year reign by a Turkic people in the sixth century in “the northeastern part of China’s Xinjiang.”

We learn that there are more than 100 million speakers of Turkic tongues worldwide, and more than ten countries in which they reside are dutifully listed. But the entire Foreword never uses the words “Uighur people,” nor does it mention the fact that there are some ten million Uighur speakers in Xinjiang, an area that covers one-sixth of the PRC.

The Foreword gives the slightly bizarre impression that this dictionary is a reference book aimed at facilitating politically correct communication between citizens of two distant countries, rather than cultures and languages that have been interacting non-stop for thousands of years.

That said, it does look like a very useful reference book — all 2,000-plus pages— and I can’t wait to put it to good use!

One thought on “Book Review: A New Turkish-Chinese Dictionary”