All three of the novels in Fan Wen’s trilogy set on the Yunnan-Tibetan border in the 19-20th centuries are now available — in one form or another:

My favorite so far was the first novel in the trilogy, Shuǐ rǔ dàdì, which I described thusly in my interview with the author (A Century of Cultural Collisions in Shangri-la):

[Shuǐ rǔ dàdì] . . . tells the tale of a multi-ethnic settlement in Lancangjiang Canyon — Gateway to Tibet — beset by battles between arrogant French Catholic missionaries, incompetent Han officials and their marauding troops, Naxi Dongba Shamanists, and the dominant Tibetans, not all of whom lead pacific, vegetarian lives in the local lamasery.

But the newest of the novels to be published (translated by Shelly Bryant), is Land of Mercy. Marcia Johnson in Shanghai has written to mention that she bought the Kindle version, is enjoying it, and notes that several of the chapters include “Field Notes” by the author about how he — a devout Catholic convert raised in Sichuan — came to “learn about some of the seemingly magical elements he weaves into his tale.”

See here for an interview in French with the translator of Terre de lait et de miel.

END_OF_DOCUMENT_TOKEN_TO_BE_REPLACED

The Story of Creation

Sky and earth not yet distinct

Water and soil not yet formed

Neither flower nor beast, ho!

For his wings of passion had yet to unfurl.

The audience erupted in laughter in Chieftain Khampu Dzongsar’s spacious salon.“You sang that wrong,” uttered someone to Tashi Gyatso, the troubadour. “Those last two lines were added on by you!”

“Twang” sounded the string, dexterously plucked by the fellow in the middle of the salon who was fondling his zither and performing the Creation Ballad, like a savvy horseman lightly reining in an errant steed.  He affected a mischievous smile that evoked knowing chuckles.

Only one who enjoyed the chieftain’s good graces dared behave so nonchalantly at a gathering of nobility.

END_OF_DOCUMENT_TOKEN_TO_BE_REPLACED

The last novel in Fan Wen’s Yunnan-Tibetan trilogy, Canticle to the Land (大地雅歌), has been designated as one of the top ten Chinese books published in 2010 by China Reading Weekly (中华读书报), an influential B2B publication serving China’s publishing industry. 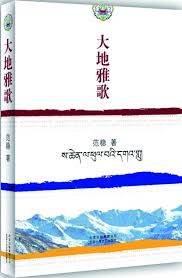 To learn more about this novel, visit:

END_OF_DOCUMENT_TOKEN_TO_BE_REPLACED

The China Daily features a piece on the third and final novel in a trilogy exploring the border on either side of Yunnan and Tibet:

At last author Fan Wen (范稳) has his reward for a decade of immersion in the multicultural wonderland along the Yunnan-Tibet border: Canticle to the Land (大地雅歌), the closing novel in his longish trilogy, has just been published in Chinese.

Why locate the tale there? “It’s my own ‘creative paradise’, an inspiration of sorts,” explains Fan, a devout Catholic from Sichuan province. “You can interpret this as a summons from God, or as a writer who has been vanquished by a certain spirituality, the cultures and beliefs of the people of this realm.”

That day in 1999 when he came across the “lonely” grave of a martyred Swiss missionary in Lancangjiang Canyon, Father Maurice Tornay, he realized he had found his “sacred vocation”. Indeed, the area straddling the provinces of Yunnan and Sichuan and Tibet autonomous region is an anthropologist’s dream. One finds Tibetans, Han, Naxi, Yi, Lisu and other ethnic groups living together.

“I find describing the interaction – and collisions – between different cultures a challenging and engaging affair,” Fan says. “Conflicts have taken place due to differences in culture and faith, like wars between Naxi and Tibetans, and Tibetans and Han. Irreconcilable contradictions occurred between Tibetan Buddhism and Catholicism when the latter was introduced.”