Legend of Mongolia (蒙古往事) is a fictionalized biography of Genghis Khan, the leader who united the fiercely independent tribes known today as the Mongols, thanks to his iron resolve, military savvy, shrewd alliances, and willingness to shed blood. Written mainly in Chinese prose, the book is peppered with original poems by the author, Mongolian words, … END_OF_DOCUMENT_TOKEN_TO_BE_REPLACED

Two poets have collaborated to publish a book containing 29 renditions of songs of praise traditionally chanted by shaman. The original odes in Mongolian were first translated into Mandarin by Mongolian scholar Ni Ma (尼玛), and then polished by Xi Murong (席慕蓉), who also knows Mongolian but was educated in Taiwan. The book is published … END_OF_DOCUMENT_TOKEN_TO_BE_REPLACED

Xi Jinping’s recent media blitz reminds China’s propaganda workers that — as Chairman Mao told us back at the 1942 Yan’an Forum — art should serve politics. No ifs, ands or buts, Comrades. To ensure the message gets across to the 55 ethnic minorities that weren’t born Han, “learn from Chairman Xi” study sessions targeting … END_OF_DOCUMENT_TOKEN_TO_BE_REPLACED 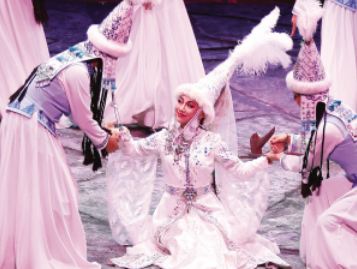 Coup d’état Fiction: A Curiously Turkish Genre offers suggested reading for books that capture the Zeitgeist during the years that followed modern Turkey’s not infrequent periods of dictatorship. The winners of the Junma Literary Awards for Ethnic Minority Writers (骏马奖) — handed out every three years since 1981 — were announced in early August. The competition … END_OF_DOCUMENT_TOKEN_TO_BE_REPLACED

There are only 30,000 or so Evenki (鄂温克族) on the Chinese side of the Sino-Russian border. But this Tungusic-speaking, reindeer-herding people — particularly the group known as the Aoluguya Evenki — has been the subject of several award-winning documentaries and even a novel that won the Mao Dun Literature Prize in 2008. According to an … END_OF_DOCUMENT_TOKEN_TO_BE_REPLACED