Chimamanda Ngozi, the Afropolitan: . . . because she has walked so confidently into the realm of non-fiction, and has agreed on multiple occasions, to take up the mantle of “spokesperson,” there is an increasing expectation that she is up to the task; that she can in fact authentically speak on behalf of the fans who adore her. Over time those fans have included young women enthralled by her popularization of existing mainstream feminist ideas and LGBTI communities across the diaspora and in urban European, American and African contexts.

Congo’s Francophone author Alain Mabanckou’s Black Moses (translated from his novel, Petit Piment) has been longlisted for the prestigious translated literature award, Man Booker Int’l Prize 2017. Amazingly, none of his works have been published yet in Chinese. 刚果法语作家阿兰‧马邦库: 为何没有中文译本？

Fox 2000 has reportedly acquired the movie rights for 23-year-old Nigerian-American author Tomi Adeyemi’s debut young adult West African fantasy novel, Children of Blood and Bone, which is the first in what will be a trilogy. This despite the fact that the book has yet to arrive in a bookstore. Henry Holt Books for Young Readers will publish under Macmillan Publishers. Adeyemi joins the likes of Chimamanda Adichie and Chinua Achebe who have had their novels Half of a Yellow Sun (半轮黄日) and Things Fall Apart (这个世界土崩瓦解了) adapted for the silver screen. And watch the trailor for Adichie’s more recent Americannah here.

Among Three Percent’s candidates for its 2017 Best Translated Book Prize are several works whose originals were penned by African writers. On the 25- 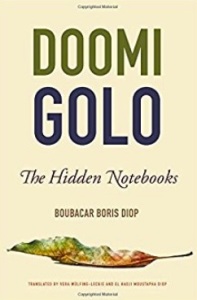 Factoids re: Africa-based Confucius Institutes (孔子院), according to the official Hanban web site: There are 46 institutes now up and running (mainly within a university), with at least one located in 36 of Africa’s 54 countries, including 8 in South Africa, 5 each in Ethiopia and Kenya, and 3 in Tanzania.